So, not to let this sound like too much of a rant, but rather a social recognition of a common trend on social media, I’d like to pose this question and see what responses I might get.  I mean, honest to goodness real responses.  This is meant to start a social discussion, not an argument, as this doesn’t pertain to everyone.

What happened to recognizing women who serve and even more so, give the ultimate sacrifice?

Now, I lost my first friend to this ongoing war on April 9, 2004.  I remember the call vividly when my mom had phoned to tell me what happened.  Someone I knew and was friends with in high school had lost her life.  Specialist Michelle M. Witmer was killed by an IED while on patrol in Iraq.  She was the first woman serving in the Wisconsin National Guard to lose her life in the war at that time.  I was sitting in the back seat of my friend’s car, driving to their house after going to church service.  It was raining and I lived in San Antonio, TX.  I remember this because not two minutes after I hung up, I sat in the back seat of a car that nearly got into a wreck.  I was devastated.  More than that, I couldn’t get home for her funeral.  In the wake of losing someone so young, my only wish was to honor her.  Thankfully, several of us who were in a student led group in high school, where I had met her, were able to attend and extend my condolences to her family.   Michelle wasn’t the only one in her family serving, but was one of three sisters there all at the same time.  Charity and Rachel, along with many of us, post yearly in remembrance of her sacrifice.  She died a hero, just as every other woman who has given her life alongside every man that has lost their life in pursuit of freedom for this country.

They are ALL heroes. 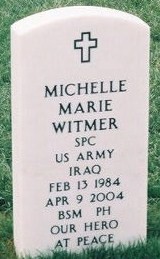 I don’t mean this to sound like an insult to anyone, nor insinuating that women aren’t recognized.  But I’ve noticed a trend recently that when someone loses their life overseas, everyone comes out of the woodwork about how they feel about things and focus on mostly male soldiers who are deployed.  You get the common army wives who chime in stating they’re happy that their husband came home safely and the obligatory “God bless our soldiers” posts.  Yet, even on my own video that was shared about one of our brothers who came home the way we hope no one will, I got one response that was evident of this mindset.  It was about how military wives harbor a special fear.  But that’s where I have a slight issue.  This is 2017.  For those deployed, no matter their gender or sexual orientation, we fear for everyone equally.  That’s the major debate in America these days….equal rights.  I won’t go off on a tangent about the insanity that our media adds to the blind following of so many on politically-fueled outrage.

But really, why, in this day and age, do people still clump themselves into one stereotyped group and pretend not to recognize the changing climate of our military forces?  Yes, they are still predominantly filled with male roles, but as a woman serving in the Army, I have a totally different perspective than a stereotypical “Army wife” and the struggles they go through.  There is no denying that being a military spouse is by itself a difficult and trying task.  But, it doesn’t excuse making blatant or ignorant statements.  The focus in our media today is all about inclusion, right? Yet I can say from experience, I’ve never felt more ostracized than when I went out for my “free meal” on Veteran’s Day this last year after returning from a war zone.

I walked into the restaurant, already feeling awkward and unwary of being in public.  I still hadn’t readjusted to American society and was out running errands and had gotten hungry.  Now, I wasn’t just hungry.  I was HANGRY.  I had been dealing with pushy, rude people all day and was in no mood to be bothered if at all possible.  But, being Veteran’s Day, I thought that I would enjoy the free meal offered by one of many businesses who go above and beyond on that day.  It probably didn’t help that I walked into a store that I frequent to find them welcoming everyone in and offering snacks and refreshments in celebration of our national holiday.  Yet, when I inquired if they were honoring the military discount that day, I got a look of disgust and a very stark “No” from the employee.  I was taken aback slightly, as they seemed to honor bringing people in and acting like they were celebrating it, yet they took offense when asked for something that is common in many stores (if not their common practice) at least on that day.  So, here I was, walking into a restaurant that I knew did an awesome job treating veterans right.

This is when I felt the most alone.

Let me be clear, this is not a woe is me story.  This is what happened and how I personally felt about it.  I was standing in a restaurant, surrounded by other veterans and their families.  The staff was incredibly attentive and dressed overtly patriotic in recognition of their employer celebrating the holiday.  This was fine, until I sat down.  I waited about 8 minutes in their entrance until I was finally acknowledged.  I was on my own, and I think that they were waiting to see who I was meeting there.  Now, I was wearing not only a t-shirt with insignia from one of my locations I had deployed to, but also my hat with my nickname nametape on the back and our unit identifier patch made by our Afghan counterparts, in both English and Arabic.  I thought these would make it easier to be recognized on that day, not for attention, but because I was in the process of moving and these were comfortable go-to clothes.  I took my seat at the bar, quietly, ordering a drink while the women behind the bar whizzed around with a bubbly and thankful attitude.

Across from me, another vet on their own.  He and I made awkward eye contact while he observed me observing everyone else.  I was quiet and feeling out of place.  A friend I had just seen at his workplace not two hours prior, walked in the door at this time.  I waved at him.  He came over and sat down next to me, relieving my apprehension to being there just slightly.  Finally, the bartender came over and spoke to me, now because it was an us.  My friend, smiled, and asked for the special menu.   Without hesitation, she grabbed one for him and then brought me a regular menu.  Before I could say anything, he chimed in,

“Hey, she’s a veteran too.  She also needs the special menu for today”.She paused, with a perplexed look on her face, and then with hesitation, handed me a menu.

This is when I again connected eyes with the vet sitting across from me.  He could sense my slight humiliation from what had just transpired.  She came back, a few minutes later, and took our orders.  My friend, being a spunky guy already, was going to as many restaurants as he could to collect his free meal so that he could deliver them, as he did every year, to the homeless shelter for others to eat and enjoy.  Because he was on a short schedule, he exited not even five minutes after my food arrived.  So, there I was, again, alone at the bar.

Now that I was feeling slighting embarrassed and vulnerable, I ate quietly, trying not to draw attention to myself.  The whole time I was there, I traded glances and unspoken conversation with my friend sitting across from me.  A few minutes after, the bartender came around the bar and started hugging everyone who had served.  Let me point out, she hugged only men.  I sat there, silently observing this happening.  She then added on that there was a WWII veteran eating alone in the corner and encouraged some of the younger looking male vets they should head over and have a quick chat, as he came there every year for this meal.

I again sat, silently conversing with my friend who had only engaged in awkward eye contact with me.  He could see my despair and that her statement had made me feel like less of a soldier…someone who was now invisible.  Every statement made out loud was thanking the men in the building, all the while, I was sitting right there.  A patch on my OCP patterned hat, nametape on the back, and Afghanistan insignia on my deployment shirt.

Then and there, I didn’t exist.  I’ve never felt more out of place and invisible in my life.

I am thankful to have served beside every MAN and WOMAN in our military.  Those who give their lives, be they soldier or military contractor, I couldn’t be more saddened or proud of.  That very day, 4 Americans were killed in an IED blast on Bagram Air Force Base.  http://www.cnn.com/2016/11/11/asia/afghanistan-bagram-blast/  Immediately, I contacted the people I knew there, contractor and soldier alike, to ensure they were safe.  We lost someone in our first week in country, no one ever wants that news. https://www.defense.gov/News/Article/Article/639975/us-service-member-killed-2-others-injured-in-marjah

It is important that we, as an inclusive culture, recognize both male and female military members for their service.  Not to be confused with a feminist agenda that some people would stipulate in a case like this, but because they deserve the same respect and recognition, no matter their gender.

We have lost so many lives since the wars started in 2001.

Let’s try and give thanks and recognition to EVERYONE.

Let’s steer away, especially the proud military spouse, from phrases like “God bless our boys”… Social media is catalyst for ongoing conversation, which often turns to arguments, on personal opinions and unnecessary entitlement.  People feel like their every thought is now a means for stating their public opinion, therefore validating their point and feeling of self importance.  I don’t want this post to be confused with this trend.  I’m merely an observer who is connected to this issue from a unique perspective versus the general American female because I am a female serving in the military.  On top of that, of the 14 people I deployed with, 10 were female.  This is a rare ratio, but one I am proud to say I contributed to.

I am a woman and I am an American Soldier.

In memory of all those who have given their lives, including the two I have  closer connection with…We salute you and thank you for your sacrifice.

You are all true heroes.

For a video review of the day SFC McClintock lost his life, head here 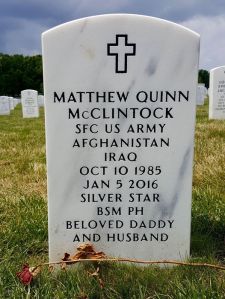 2 thoughts on “Wait, women are serving too?”